My wife Audrey and I retired and moved to Grand Junction from Los Alamos, NM in November 1990. I was a physicist at LAMPF (Los Alamos Meson Physics Facility), and before that the Ames Laboratory Research Reactor at Iowa State University. I intended to go to my workshop and do woodturning on my lathe. That got interrupted by my neighbor asking me to help with an Odyssey of the Mind competition at Wingate Elementary down the street in January 1992. While there Tom Parrish, Principle, asked me if I might help a teacher, Gerry Wigent, who was looking for someone to help with science in her classroom. Oh my, that got it started, I quickly became hooked on inspiring kids. I started out by taking three to five kids at a time from the classroom doing projects with them, meanwhile Audrey was helping kids in the library.

It began to grow, spreading out to other schools and classrooms in the district. I began to build and put together hands-on type of displays and demonstrations to haul in the trunk of my car. It was simply exciting and exhilarating to see the reaction of the kids to carry out small experiments. What could be better than “Wow look at mine” or shouts of “mine are moving” when rubbing a cloth on a plastic salad bowl lid with Cheerios or Rice Krispies under it dancing due to static electricity? The students loved having something to take home, to keep, and to show their parents. This entailed buying material to give away like PVC pipe for static electricity, salad bowl lids by the box, straws and paper clips, and making parts for electroscopes for them to assemble. It was in these early years I coined the acronym SITHOK, Science In The Hands of Kids. 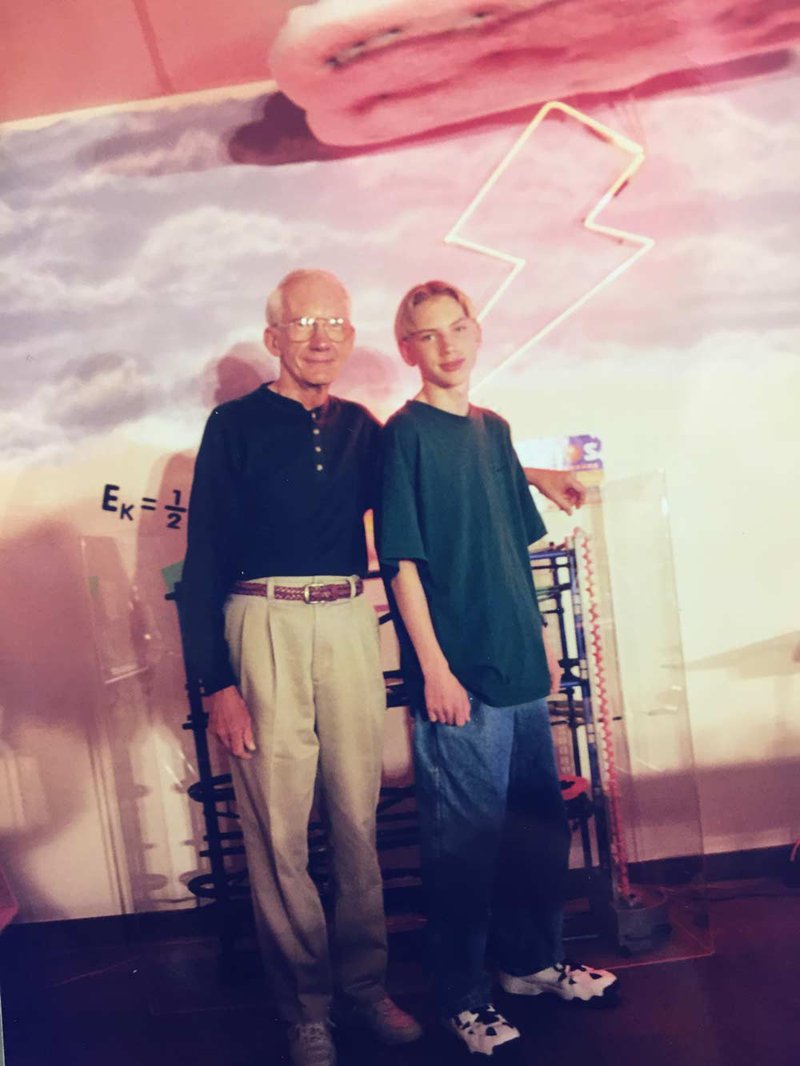 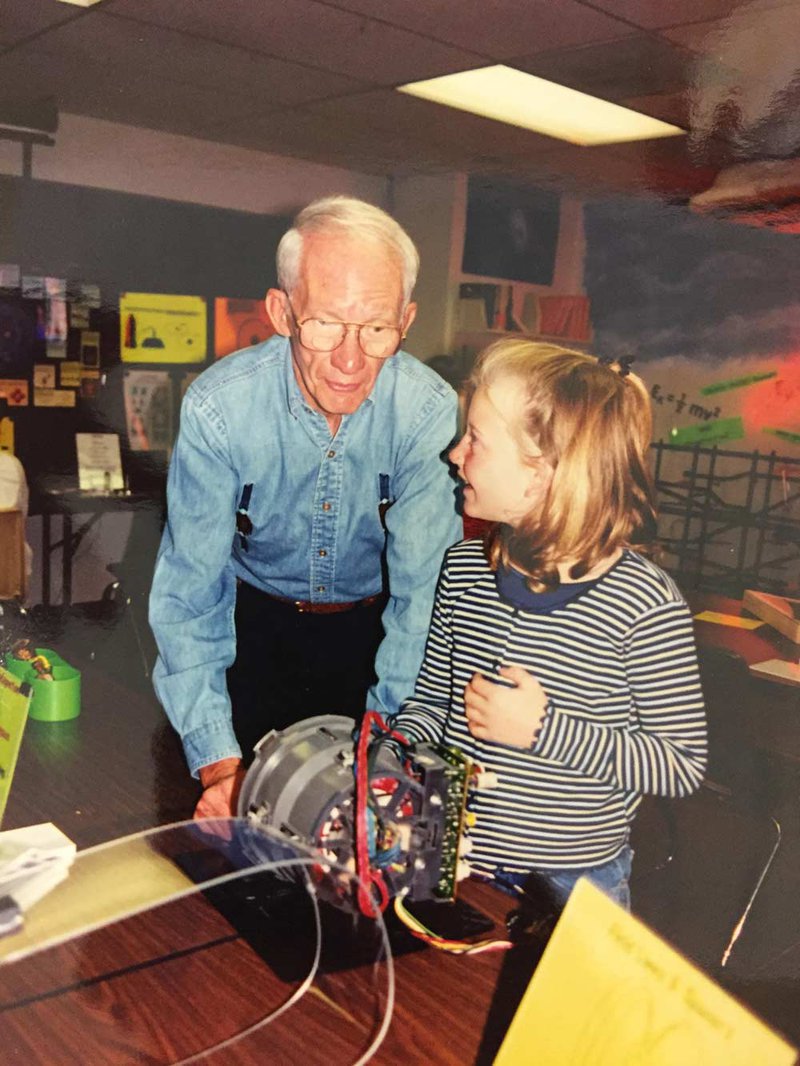 Science on the road

Having come from a small one room country school in southeast Nebraska, I had the urge to take my show on the road to places like Maybell, Norwood, Nucla, Naturita, and Ouray to name a few. You had to want to go, because these schools did not know me, I would write and explain what I would bring to the kids, and it would be at no expense to the school. Everywhere we were met with excitement and anticipation as we would go into every classroom with experiments. Audrey was coming along many times to help me. It was like science on wheels out of our fifth wheel trailer and truck. Observations of the reactions of students was creating impressions on my mind. They were very hungry for hands-on science and activities as an important learning tool. The thank you letters were amazing, they illustrated the wide span of interest the students had. I love to demonstrate science and math with soap bubbles, and acquired the name of Mr. Bubbles from Appleton Elementary. This road show continued through 1998.

Another milestone in my life also occurred in September 1992, I was asked to help a shy little third grade boy, Ryan Patterson, who was bored with school. He wanted to stay home and build on his robots Scorch and Chip. I met him at his house, he showed me his shop area, the robots he had built, and it was obvious to me this little blond haired boy wanted someone to share his passion for electricity and electronics with him. After all, all he wanted for Christmas at age three was an extension cord which his parents reluctantly gave him. That cord went everywhere with him, to bed, to grandma’s house, and the store. I felt I had to mentor this boy, and indeed we were a “match” as detailed in Intel Education which described us as a “Perfect Match”. He started coming to our house every Saturday all day for seven to eight years. I had not seen the likes of a boy like this before, mind you, in the third grade he would sit down at the workbench at nine in the morning and be there yet at five, reluctantly stopping a bit for lunch.

In my workshop, we did hands-on activities, such as building robots and electronic circuitry, that helped Ryan understand the basics of electrical engineering. At the same time, I was modeling what it means to be a scientist, engaged in the process of asking questions and seeking answers. We took him out of school for a week in the fifth grade to participate in robotics competition in Santa Fe, NM, and again in sixth grade for competition in Calgary, Canada. Seventh grade began Science Fair Competition for five years culminating in an eight week internship at age 14 in an electronics design company in New Orleans, and then the Grand Award at the International Science and Engineering Fair, including a week trip to the Nobel Awards in 2001. He designed and built a glove to translate American Sign Language to the written and spoken word. He also won the Siemens Westinghouse competition for $100,000 and Intel Talent Search for $100,000. In his junior and senior years of high school he won all the major science competitions in the United States amounting to $500,000 in cash and scholarships.

A place to call home

Spending time with Ryan, Wingate, and all the kids on the road demonstrated to me the value of hands-on math and science education at the elementary and middle school levels. I also was getting the desire to do teacher workshops which I looked upon as a multiplying effect. In 1998 while visiting Tom Parrish at Wingate Elementary I expressed my desire to have a permanent place where I could have many more hands-on exhibits and have the students come to that Center. Tom said “I have an open classroom, what say we set one up in there”? Oh wow, that was music to my ears. We immediately raised some funds, bought folding tables, I was furiously building displays, and soon the “Sci-Tech Exploratorium” was opened. We even had braille signage for a Wingate student. The lightning and thunder display on the wall built by Ryan had to be used sparingly to not disrupt nearby classrooms. It was incredible, class field trips began coming to Wingate. I guess you could say I was hungry for more, so I asked the school district “Don’t you have any space that I can make this bigger?” In the spring of 1999, Tom Parrish, Penny Teeters, and I went to the old Columbus School building and met the Assistant Superintendent. She said “Here is your space, do your thing.” Thus what I named the “Western Colorado Math & Science Center” was born. I was then on my way to “doing my thing.”

Moving the Sci-Tech Exploratorium and building of new displays took up the summer of 1999 made the Western Colorado Math and Science Center ready for the first visits in January 2000. With the help of many wonderful volunteers and help from the community we began seeing thousands of students and the public ages 3 to 93. It provided 160 hands-on displays for the exploration of science, math, and engineering for a better informed public. We began seeing field trips from schools up to 160 miles away with numbers ranging to 100+. I was excited to have a lecture room to present and show them science in demonstrations and hands-on manner, creating excitement and enthusiasm. My requirement was for one docent for every five students, being made up of a marvelous band of volunteers. We provided classes and workshops for teachers and summer camps for students. 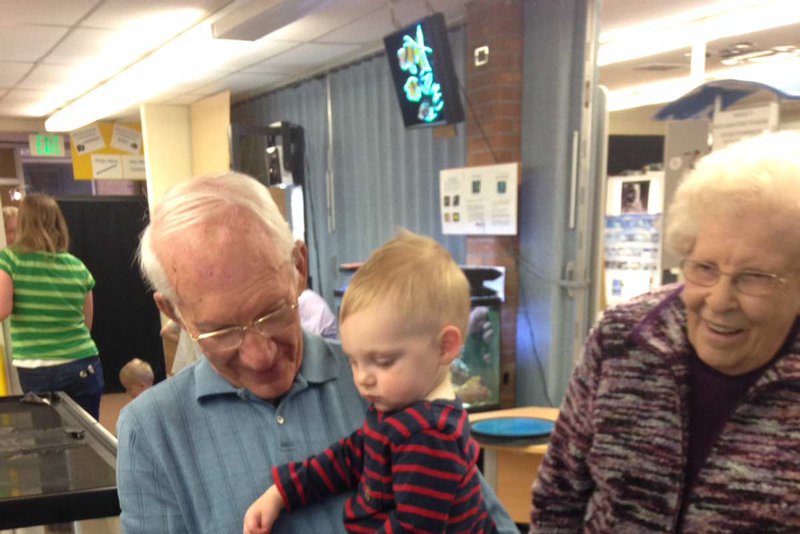 I was slowed a bit with lung cancer surgery and chemo in 2007 – 2008. Audrey had worked tirelessly with me all these years as volunteers and we wanted a little slowdown. In 2009 the first paid director was hired. The Board of Directors changed the name to the “John McConnell Math and Science Center”. I had the desire to take science back on the road, so Audrey and I at about the age of 80 took a new van full of science activities for entire schools on the road in Colorado. We would go for a week, come home for a week to restock and rest, and go out again seeing up to 800 kids in a week for a period of two years. When some students would come up to Audrey, give her a hug and say, “this is the best day of my life”, we knew it was worth it. It has all been a labor of love.

We are so happy to see the Center renamed to EUREKA! McConnell Science Museum and expanded to Colorado Mesa University. We believe it holds great promise for the future for students, staff, and the public.